By Lim Li Ching, Senior Researcher, Third World Network Climate change is an urgent challenge facing farmers in Africa. As our world warms, many farmers are already experiencing devastating consequences, including storms, drought, floods, heat waves and extreme weather events. The implications for food security are severe, with the Intergovernmental Panel on Climate Change (IPCC) projecting that wheat, rice and maize production will be negatively impacted by local temperature increases of 2°C or more above levels in the late twentieth century. Coupled with a predicted reduction in renewable surface water and groundwater resources in most dry subtropical regions, the prospects for agriculture are grim and extremely worrying. Into this context enters the Water Efficient Maize for Africa (WEMA) project. The objective of the WEMA project is to produce drought-tolerant and insect-protected maize varieties, both conventional and genetically modified (GM). According to its proponents, these varieties “will provide valuable economic, agronomic and environmental1 benefits to millions of farmers by helping them produce more reliable harvests under moderate drought conditions and better grain quality due to reduced insect damage. This will help farmers harvest enough to feed their families, a surplus which they can sell to increase their incomes, and help strengthen local communities and countries.” The WEMA project is a public-private partnership coordinated by the African Agricultural Technology Foundation (AATF). The partners are the International Maize and Wheat Improvement Center (CIMMYT), Monsanto, and the national agricultural research systems in Kenya, Mozambique, South Africa, Tanzania and Uganda, where field trials are either currently or soon to be conducted. Funding is provided by the Bill & Melinda Gates Foundation and the Howard G. Buffet Foundation. There is no doubt that the climate change problem is very real for farmers and tools are needed for them to be able to adapt and increase their resilience. Nonetheless, the WEMA Project deserves further scrutiny, not only for the GM component, which raises biosafety and other concerns, but also for the model it is promoting. 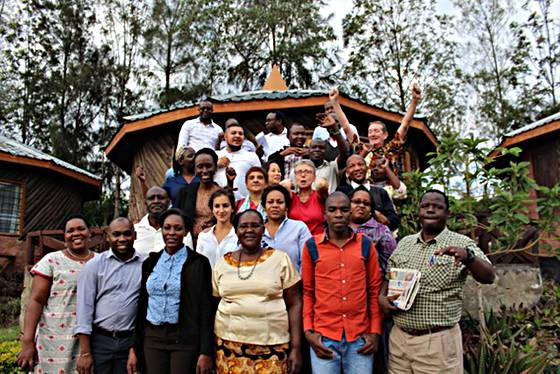 To this end, a civil society knowledge and information sharing on the WEMA project and strategy meeting was held recently in Naivasha, Kenya (19–21 July 2017). The meeting was organised by the African Centre for Biodiversity (ACB) and the Kenya Biodiversity Coalition (KBioC). It brought together representatives of civil society organisations from the five WEMA countries – Kenya, Mozambique, South Africa, Uganda and Tanzania. Such an effort was deemed necessary to break the culture of secrecy surrounding the WEMA project, as information has been notoriously difficult to obtain, questions have been deflected and civil society, as well as farmers, have been excluded. The first question that needs to be asked about the GM drought-tolerant maize is whether or not genetic engineering is fit for purpose in this case. This is because drought is a complex challenge that doesn’t lend itself to single gene solutions. The applicability of genetic engineering to drought tolerance is limited insofar as it can only manipulate a few genes at a time, while many genes control drought tolerance in plants. Moreover, droughts vary in severity and timing, while other factors, such as soil quality, affect the ability of crops to withstand drought. These complications make it unlikely that any single approach or gene used to make a GM crop will be useful in all, or even most, types of drought. From the limited data supplied by Monsanto to the United States Department of Agriculture, its drought-tolerant maize (deregulated in the United States) only provides approximately 6% reduction in yield loss in times of moderate drought. The gene that is purported to confer drought tolerance was donated by Monsanto to the five WEMA countries. However, the WEMA project is heavily reliant on conventional breeding and marker-assisted selection, which have already produced numerous non-GM drought-tolerant maize hybrids. It is not clear how much ‘additional’ drought-tolerance is conferred by Monsanto’s gene, if at all. Monsanto also donated insect-resistant traits to the WEMA countries, and therein lies the rub. In the first place, the GM drought-tolerant maize will not be available without the insect-resistant trait (and perhaps even the herbicide-tolerant trait, as evidenced by a recent application for commercial approval in South Africa for a stacked drought-tolerant and Roundup Ready maize). Questions should be asked as to whether the donation of GM drought-tolerant maize is really as charitable as portrayed, or is, in reality, a means whereby Monsanto can open the door to other GM crops and traits in Africa. Another concern is that Monsanto donated its Bt insect-resistant maize MON 810 to four of the WEMA countries – Kenya, Mozambique, Tanzania and Uganda. This GM event is being phased out worldwide, due to the development of resistance in major target pests, making it next to useless. South Africa, which had grown MON 810 maize since 1998, experienced the development of rapid and widespread resistance in the target pests, and has since phased it out. Instead of MON 810, Monsanto, through the WEMA Project, donated to South Africa a stacked Bt maize event that expresses two different insecticidal toxins. One wonders why the other four WEMA countries have been donated a trait that has not worked elsewhere. Surely it is not too cynical to ask if Monsanto is being altruistic or merely dumping its unwanted technologies on Africa. 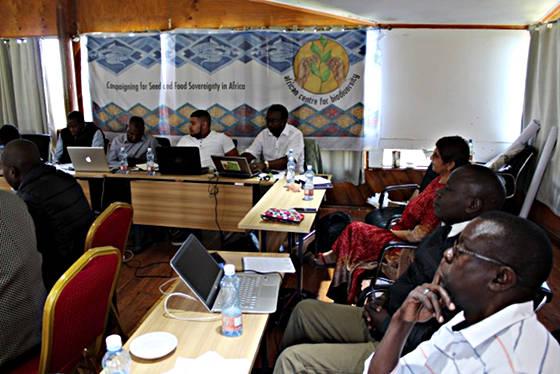 The role of CIMYTT, which holds maize germplasm in trust for the world, might provide a clue as to what benefits Monsanto might gain from the partnerships. Through an earlier project called Drought Tolerant Maize for Africa (DMTA) that involved 12 African countries –Angola, Benin, Ethiopia, Ghana, Kenya, Malawi, Mali, Mozambique, Nigeria, Tanzania, Zambia and Zimbabwe – CIMYTT had already identified drought-tolerant maize germplasm for WEMA use. This maize germplasm, which is a collection of Africa’s diversity of maize, may hold valuable traits, both for the future of our agriculture and food supply, and, from a private sector perspective, for future commercialisation and profits. While Monsanto can now access this elite germplasm, as well as those donated by the national gene banks in the five WEMA countries, there is no information as to whether appropriate safeguards against biopiracy and benefit-sharing agreements are in place. What African farmers need are real solutions to climate change. The conventionally bred drought-tolerant maize, while not posing the concerns that the GM variety does, is part of an aim to build a seed industry in Africa that is driven by the private sector, through the adoption of hybrid maize varieties. However, time and again, we have seen that real solutions do not lie with corporations or the industrial model of agriculture, but, instead, in the hands of farmers and farmer-managed seed systems. Many answers are to be found in farmers’ knowledge of, for example, how to create healthy soils that store more water under drought conditions and how to grow a diversity of crops to create the resilience needed to face increased unpredictability in weather patterns. Agroecology draws on the knowledge and experiences of farmers, and there is growing international recognition that a paradigm shift towards diversified agroecology systems is necessary and urgent, particularly in the face of climate change. Agroecology outperforms conventional agriculture on many fronts, whether from an economic, environmental, health, social or cultural perspective. Evidence is particularly strong on the ability of agroecology to deliver healthy and stable yields by building environmental and climate resilience. For example, data from a 30-year comparison from the Rodale Institute in the United States show that organic corn yields were 31% higher than conventional yields in years of drought. By way of comparison, GM drought-tolerant corn (the same event used in the WEMA project) only outperformed conventional plantings by 6.7% to 13.3%, far less than the organic. All these issues were fully discussed at the Naivasha meeting, and civil society came away empowered and equipped with more knowledge and information about the WEMA project. We had time to bond, to renew and make new friendships, and to think strategically about what needs to be done to promote real solutions to climate change, and to counter false ones. Download .pdf